After my Chicago Wildflower Works had begun its glorious blossoming in the mid-1980s, garnering great attention and commendations, some new gallerists in Dallas asked me to return there to give a photo slide show and talk of it. Their businesses were located on Fairmount St., as was my atelier. My wife Joan forewarned me that a very good male friend of ours would have a message for me at that event. Other than Joseph Hirshhorn, this friend was the most knowledgeable contemporary art collector I have known.

The friend did come forward with a message; it was that Dallas arts patron Margaret McDermott had told him that she had so missed the long talks that she and I used to have. He was to ask me to give Margaret a phone call the next time I was in town. My reply to him was that it was my friends who were “pushing up daisies” and that Margaret had “made her bed and would have to lay in it.” I well knew that this phone call invitation by Margaret could mean only one thing: it would be a tacit agreement to keep my mouth shut about her behavior. In return for my silence I would be handsomely compensated by Margaret to again become the best known and richest painter in Dallas—and probably anywhere else.

My reference to deceased friends was to those specifically who had killed themselves. One very good friend who committed suicide was considered by gallerist Ralph Kahn to be the best contemporary fine art collector in Dallas. The other suicide was a very promising young painter whose father was a board member of the Dallas Museum of Fine Art. Both deaths were largely attributed to the behavior of museum staff and board. In the last phone call from the art collector who took his life, he apologized to me for ending his public support of my work and those of other artists. He said that he feared retaliation from his wide network of Dallas business and social connections if he continued with our professional relationship. A different person, a very rich man whose family’s contemporary art collection is probably still the best in Dallas, told me that it was fortunate that his source of income came from outside of Dallas or that he too would not have been able to support my work.

In 1977, just after my Dallas/Ft. Worth Wildflower Works had begun blossoming and after a very successful exhibit at my atelier, I found myself in the fortunate position to save two other dear friends from committing suicide. These two friends shared a commonality with the prior two suicides: the Dallas Museum of Fine Art and its behavior. My counseling effort was all that the latter two friends needed to carry on. I sought no compensation during the time that I helped them. As a matter of fact, so intense was that period of my life that I made no paintings or drawings for an entire year.

My Wildflower Works offers a practical and aesthetically pleasing solution to humankind’s greatest problem: the growing scarcity of a drinkable water supply. However, some people in Dallas, Austin, and Chicago continue to hide, keep silent or spread negativity about the decades-long success of Wildflower Works. For example, then-director Jack Robinson of the Dallas Parks and Recreation District reneged on his promise to me to file an application to the Hoblitzelle Foundation to fund an exhibition designed by me that would benefit the Dallas Museum of Natural History and the National Wildflower Research Center (NWRC). Robinson went on to order the destruction of the Wildflower Works in Dallas despite an agreement to respect it. 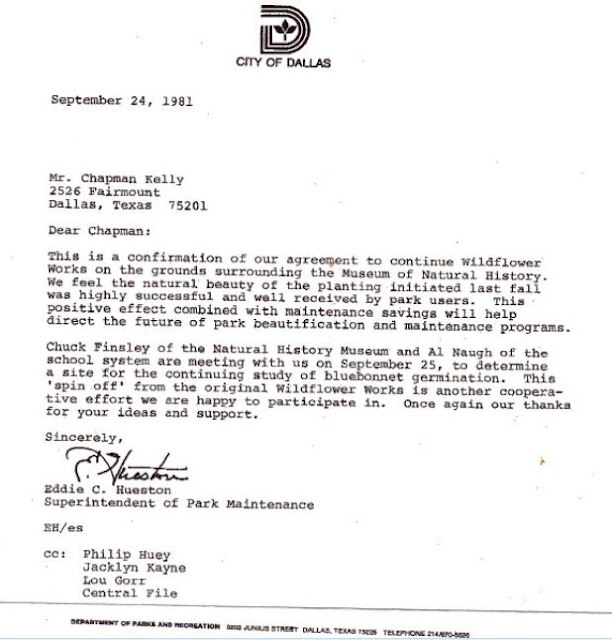 When I sought to inform the NWRC about Robinson’s negative behavior (Robinson was an NWRC member at the time), executive committee officer Nash Castro refused to discuss it. The subsequent and unexpected firing of NWRC range scientist Dr. Thomas Allen signaled that organization’s radical change. The destruction of the WW, no follow up discussion of it and the Allen firing pointed to the change of NWRC’s original mission from a research-based entity to a clearinghouse of others’ research. This was all very odd because former first lady Lady Bird Johnson wrote a personal letter to me stating “…you are the real pioneer…”of the Wildflower Works, the model for NWRC. 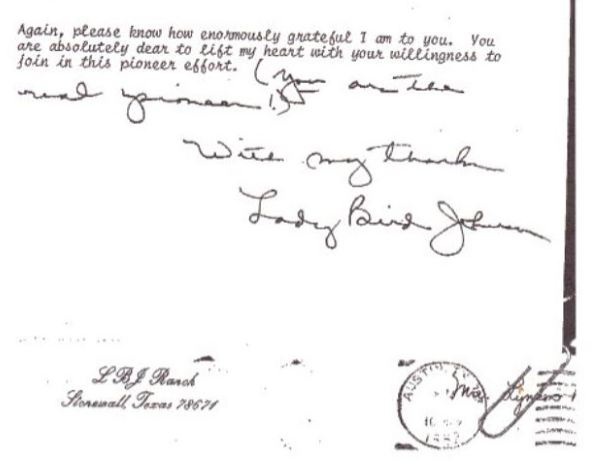 In the early blossoming of the Chicago Wildflower Works we were led to expect the Smithsonian Magazine to publish an article on it. 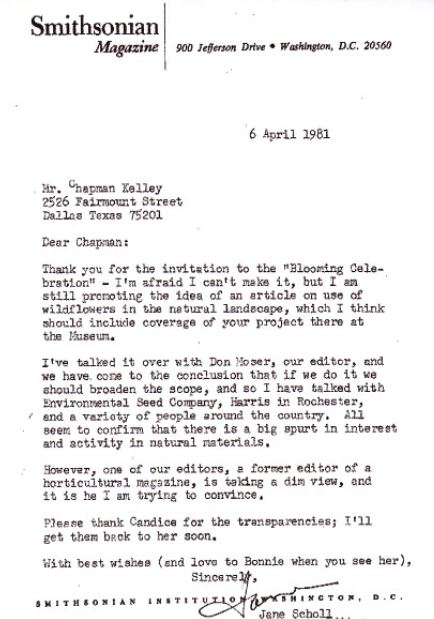 Instead, I received a phone call from an out-of-state photographer asking me to meet him in Chicago. We met at the CWW site where he asked me if I personally knew of Lady Bird Johnson, her lawyer and accountant. I told him yes that I had met all three. He went on to say that while on assignment in Houston he met up with Lady Bird who invited him to Austin. He said that she entertained him royally and filled him with stories of the great plans for the NWRC. Wasn’t it ironic that the nearly identical description of the future of NWRC—floral beauty not requiring any tap water—was what he and I were staring at, the CWW? What puzzled him about his meeting with Lady Bird was that she made no mention of me, zero.   I countered the photographer’s information gap of my work by furnishing him with evidence of the Wildflower Works predating the NWRC by at least seven years and my involvement with the intimate planning of the NWRC!


So he arranged for National Geographic Magazine to send a photographer and interviewer (twice) to Chicago to flesh out the CWW. For that photo shoot, the Chicago Park District furnished cherry picker-style equipment to enable some high-angle images, one image is below, to be taken for the following year’s National Geographic spring article. 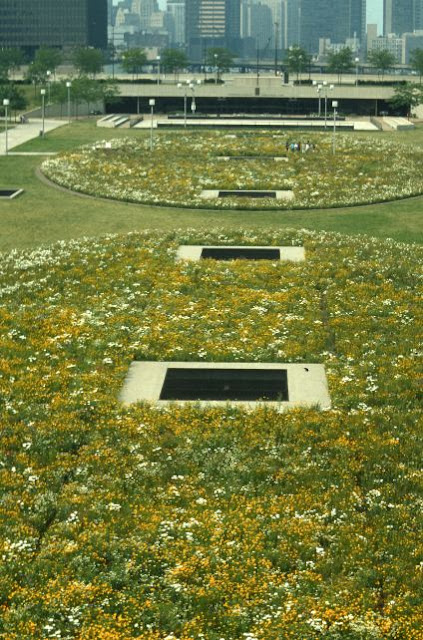 Lady Bird was keenly aware of the very successful CWW which range scientest Dr. Thomas J. Allen and I had produced solely at my expense.

In 1988, after the Chicago Park District agreed to an out of court settlement in a 1st Amendment lawsuit in which I was the sole plaintiff forced to protect my Chicago Wildflower Works as "free speech," a freelance writer was engaged to do a story for Chicago Magazine about my work. When Chicago socialite Hope McCormick and oil tycoon wife Bonnie Swearingen learned of the “hatchet job” the article was launching, they refused to be interviewed for it. It was their way of casting a vote against the magazine’s hypocrisy: the magazine had previously published much positivity about the CWW. And when the magazine reporter got in contact with Dallas arts patron Margaret McDermott, she replied that she may have purchased something from me. That had to be the understatement of the century! Had she forgotten that I was largely the sole curator of her personal art collection or that she had purchased an early still life of mine from Atelier Chapman Kelley? Margaret failed to tell the reporter that she had bought and donated one of my “poplar series” works to the El Centro College and a large wildflower painting for the office of the Dallas Medical Center School’s top administrator. She also donated the work of other Texas artists that she purchased from my atelier for other Dallas city colleges. Furthermore, she purchased from my atelier original works by Arp, Henry Moore and Rodin. On top of that I had presented Margaret’s husband Gene with a framed painting of my work of his favorite cottonwood tree at their “farm” country home. The painting was moved to his room as he succumbed to illness. Some stranger…that Margaret. It’s strange as to why she would continue to fund the Lady Bird Johnson Wildflower Center especially after it dropped “Research” from its title. Conducting plant research and publishing the results was the original purpose of the Center. One has to wonder if Lady Bird knew in advance that the site would eventually become only a personal monument erected at taxpayer’s expense; donors could list NWRC/LBJWC tax-exempt contributions as charitable deductions on their federal income tax returns.

It’s worth repeating that WW was overwhelmingly accepted by the general public as a stunning floral display. It yielded continuous blossoming across three seasons. During the winter what remained was sculptural beauty. WW thrived on rainwater, used no tap water, insecticides or fertilizer. From an environmental and ecological perspective it conserved precious tap water which city and suburban front laws, airports and other areas guzzle without end. Extrapolating this important water conservation aspect to local, state, national and international uses, one can immediately appreciate and understand the benefit to humanity.

Upcoming Memoir chapters will reveal efforts by others—that have taken place since my permanent return to Texas in 2006—to keep influential Dallas groups from knowing of the proven success of the Wildflower Works. I have learned that the Dallas arts blacklist is active and influential, just like decades ago, only more intense. Unfortunately for me, it has adversely affected my life as an art professional.

Since the beginning people have attempted to usurp my Wildflower Works concept; and in the dead of winter 2011, three appellate court justices in Chicago actually cobbled together a legal barrier to my authorship of it! More on that astonishing decision later.
Posted by admin at 8:25 PM