During the past month painter Chapman Kelley has completed four revealing chapters via his memoirs.  In this piece he reflects on the past, current and future of the U.S. art scene.

Why is it so important to return to strong professional management of art museums?

The difference, dear friends, if you haven't noticed it, between the 1950s, 1960s and early 1970s and now (the present), is that during those earlier years, the artist was indisputably and unequivocally central to the art scene!  The public benefited from this legitimate arrangement through its exposure to art by burgeoning professional artists.  This was clearly evidenced in Dallas by the crowd who went, at their own expense, to the opening of my first New York solo exhibition and to an awards ceremony at the National Academy of Design.  Dallasites prided themselves as shareholders, holding a share in our success!  They returned in even greater numbers the following year, and Braniff Airlines volunteered to schedule a 707 just to take a group of us to New York for my second exhibition.  [See Sam Blain Dallas Art History Blog]

Art critic Harold Rosenberg, with whom I served on a panel for The Matrix for the Arts Symposium at the University of Illinois in 1967, commented that the artist has been demoted.  Essentially, art market manipulators are having their day at the expense of both art professionals and Dallas citizens who pay for it all.  All funds used by museums are either direct government funding or tax deductible funds, therefore qualifying as public funds.
The late Ted Pillsbury, an important player on the American art museum scene, said that art galleries are becoming more like museums and art museums are becoming more like commercial galleries.  The New York Times article, "Stealing The Show," published Sunday, October 23, 2011, echoes Pillsbury's opinion.  It states and illustrates that galleries are winning the race, have important exhibitions with scholarly catalogues, and are gaining greater audiences because they have better shows and are admission-free while most art museums around the country charge admission - $25 per visitor at the Museum of Modern Art.

It is obvious to me that a large part of the difference between the art world of earlier years with the current art world is that art museum donors have usurped aesthetic decisions that were once the exclusive domain of art professionals.  "Big donors," driven by deep pockets and a self-serving interest in personal profits, in effect control too many museums' aesthetic decisions in order to inflate the value of their private holdings and manipulate the art market.  Successful art dealers and serious collectors, on the other hand, bet their own money and seek a preponderance of independent professional opinions, including assessments by more established artists (in Dallas, however, the more established artists are blacklisted), to pick the most promising newcomers.

It's pathetic that many donors and speculators seem to have convinced themselves that, not only do they know more about art, but they are also more important than the artists themselves.  Shame on those of you dilettantes, who distort the art museum world out of greed and personal gain, thus destroying the credibility of our art museums - formerly fair arbiters of taste - replacing professionalism with your twaddle!

I would like to venture some questions for all to ponder and chew on while we partake of our holiday feasts together with our children and grandchildren.
As our children grow to adulthood, what will they inherit in the art museums of the future?  How will museum aesthetic decisions made now impact the legacy of future generations and the art of their own times?  And how will those decisions shape our children's aesthetic experiences and attitudes toward their art institutions?  Will they reflect the best of their inheritance or will museum art represent the dregs and left over fantasies of current market manipulators and speculators and/or the fickle fashion of the moment?   Will serious art and artists continue to be held hostage by the distortion of art as mere commodities for financial market speculation by fashionistas?
I believe that irrevocable hard evidence, which will be revealed in my ongoing memoir, will point to obvious answers.  Please stay with us and hang on for a bumpy but serious ride, which hopefully will contribute toward the flourishing of a more professional art world based once again on integrity, museum accountability and transparency.
The image below is of a letter written to Chapman by University of Texas Professor in the Arts Donald L. Weismann regarding the work of sculptor Alberto Collie.  The letter is dated November 15, 1966. 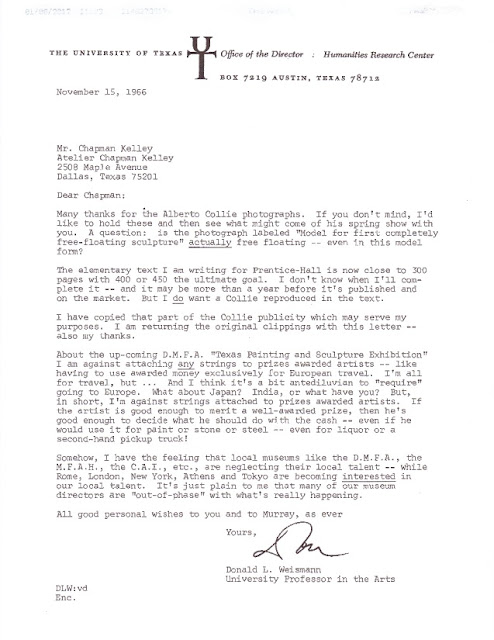 Have a healthy and prosperous New Year!

All of the above is copyrighted material, all rights reserved.  Permission for use will be considered upon written request.  Blog comments are encouraged, the use of actual full names is strongly recommended, as are affiliations with organizations.
Posted by admin at 7:18 PM